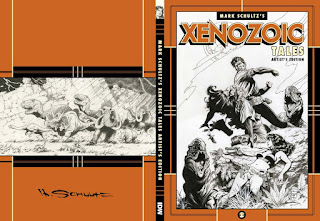 Final cover for the regular edition 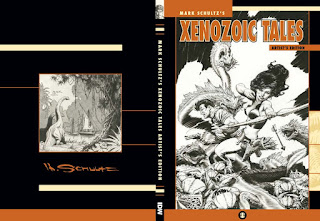 Final cover for the variant edition 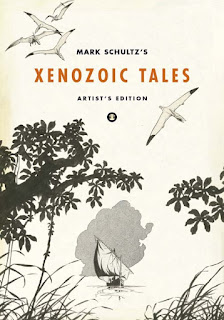 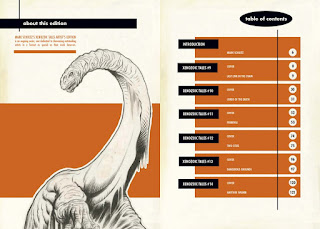 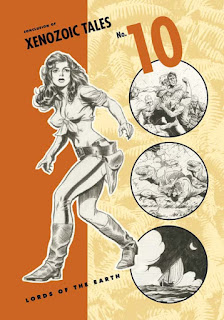 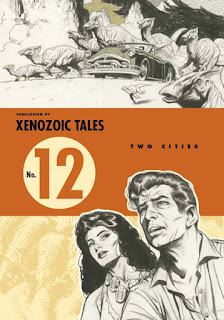 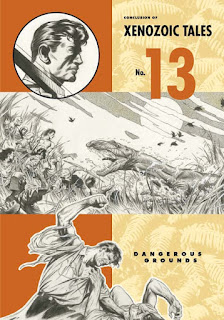 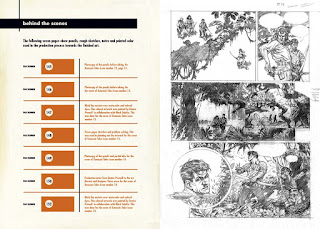 It's not unusual to remember the details of very significant events in your life. For instance, what the weather was like the day you got married, or what song was popular when a child was born. Those important things seem to automatically be imbedded in your memory banks.  I don't know if this is good or bad, but I remember the details of that day in 1986, when I first saw Death Rattle #8 on the shelf of a local comic book shop. It was mid-afternoon and the sun was streaming through the windows, and as if it were a solar spotlight, it directed my eye to the front shelf where that comic sat. I saw the cover, and remember thinking, "I've never seen this Wally Wood illustration before." I also remember how my pulse quickened when inside the comic, it made reference to the story becoming an ongoing series.

That was my introduction to Mark Schultz and Xenozoic Tales. Later that year, I attended my very first comic convention at the Chicago comic con. To my great delight I discovered Mark Schultz would be in attendance. In a moment of sheer geekiness, I knew I had to go introduce myself to him, and tell him of my admiration for his work. As anyone who's ever met Mark knows, he is a very sincere and kind man. This actually, made me an even a bigger fan.

As a designer, I told Mark of my ambition to one day work with him. I ended up putting samples of my work together and mailed him a box full of goodies. Denis Kitchen, who was Mark's publisher at the time, got wind of the stuff I sent to Mark and asked for his own box of goodies. After that, we began a serious dialog about the possibilities of an actual project. Denis came up with the idea of doing a limited edition portfolio of Xenozoic prints. After several prototypes, I came up with the solution of putting the prints inside an e-flute folder that then was tucked into a silk screened wooden box. At the time, it was a pretty pricey item, but none-the-less it sold out immediately. That was my first collaboration with Mark. Over the next 20+ years I've worked on several book design projects with Mark, and have created some very unique San Diego Comic con exclusives with him.

Because of my relationship with Mark, this particular artist's edition, felt very personal. Over time we've tried to establish a look and feel for Xenozoic Tales. We've experimented with the use of certain type fonts and styles of design. It's a formula that I think works and sets Xenozoic apart from other publications. It's no secret that I have a love for the design style of Russian Constructivism. I love the use of geometric shapes, and the airiness of white space. It feels formal and uniform with a sense of order. It makes sense in the context of the world of Xenozoic, which always seems to be searching for order out of the chaos.

After all these years, I never get tired of admiring Mark's incredible abilities as an illustrator. I appreciate the fact that he trusted me with putting this book together. He allowed me to take bits and pieces of story panels and collage them together to create new pieces of art. This is a very special book that pays tribute to a very special artist. Thanks my friend! 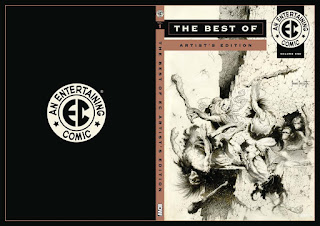 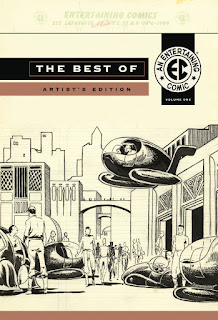 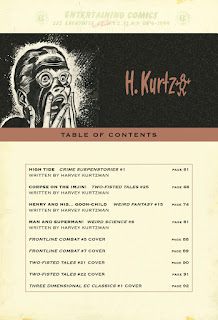 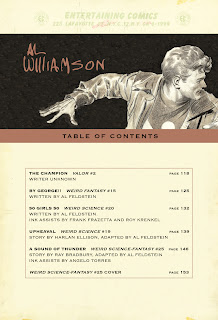 EC comics were well before my time. I didn't really know much about them until later in life. They held a kind of mystical allure to me. I knew that the people who collected them were very loyal, and maybe a little protective. My first exposure to EC came through a reprint series called East Coast comics (EC...get it?). It didn't take long until I was totally sucked in. It seemed that EC had it's own little community of skillful artists, that were unique to the company. I wanted to join their club, and hang out and talk art with all of them. I become a little envious and jealous of the people who experienced EC through their initial printing. Did they see these comics for what they were? Did they realize at the time how unique and special EC was? Did they know they were seeing history being made? I'm still in awe of the company, for not only the quality of the art, but also for the quality of the writing.

When designing this book, I kept in mind that this was volume 1, in other words, there eventually was going to be a volume 2. I wanted to create a template that could be used for the second volume, that worked as a companion piece but also had it's own individual identity. I like the elegance and simplicity of the layouts. I think using seriffed fonts helped to give it a classic feel.
Posted by Randy Dahlk at 3:15 PM No comments: 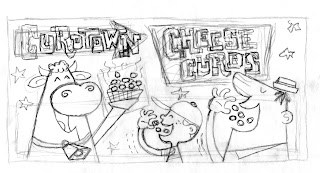 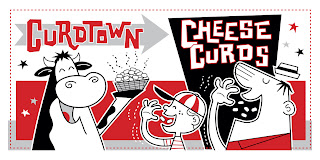 Mall of America has a new tenant in the food court area. Flav-R-Fries opened a little over a month ago. Flav-R-Fries food items lean towards a state fair type of experience. Along with Nathan's famous hot dogs (deep-fried), they also have chirros, funnel cakes and of course several different flavors of french fries. Being that it was a start up operation, they wanted to make sure they served the best of the best. So, naturally they chose to add Curdtown cheese curds to their menu. Kevin the owner, wanted to help promote the product, so he asked if we could create a glass cling to go onto the glass on the front counter.

Wanting to emphasize the state fair attitude, I chose a graphic style that to me, presented an era of advertising that fit well with that feeling. I thought in this case, simplifying the design was the best direction.  Returning to the days of Tony the tiger, the Frito Bandito, cocktail napkins, and novelty gag gifts seemed like a no-brainer. In the bigger picture, I'd like to re-brand Flav-R-Fries with this style of graphics throughout the concession front. I hope this happens, we can only wait and see...
Posted by Randy Dahlk at 7:43 PM No comments: