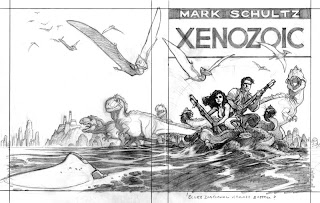 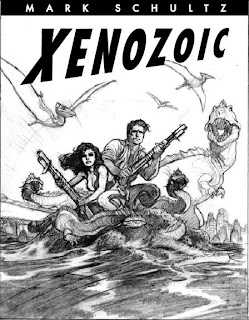 An attempt at adding a dynamic flair to the type. 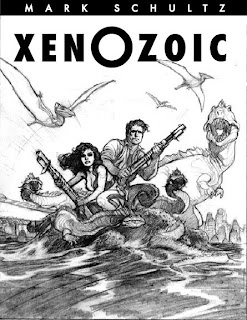 Another "experiment" with the title font
Another happy day for me! Flesk publications is going to reprint the entire Xenozoic Tales saga in one volume. It's been seven years since these stories were last printed, and this is the first time they will all appear in one fantastic volume. I'm excited because, this is one of my favorite adventure stories of all time, Mark's art is absolutely gorgeous, and I get to design the book.
Mark started the whole process by not only providing the cover sketch, but also possible type treatment for the title. Many years ago, when Mark and I started working together, we wanted to establish an ongoing look that could be carried through from project to project, with the use of a recognizable type font. The font became "Futura," it has such a bold clean masculine look to it, that it seemed like a perfect fit, for all things Xenozoic. The challenge is how to use the font without it becoming repetitive or boring. I experimented with various ways of tweaking it to try to keep it vital and interesting. The first attempt looked too much like the Superman title treatment and the second one just looked too much like crap. Even though they both were failures, Mark was very kind and considerate in his remarks about them. I was hoping he'd give me another chance...
Posted by Randy Dahlk at 7:37 PM 1 comment: 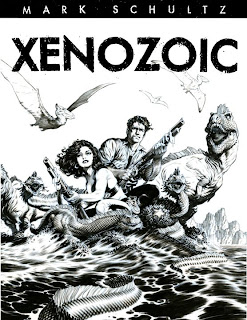 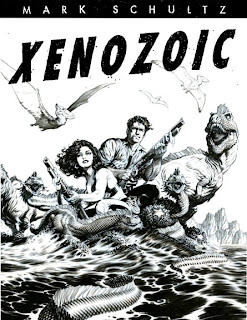 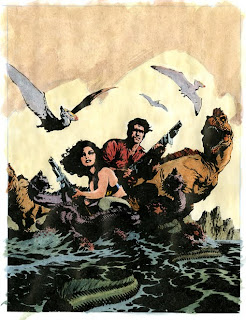 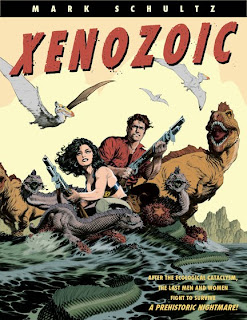 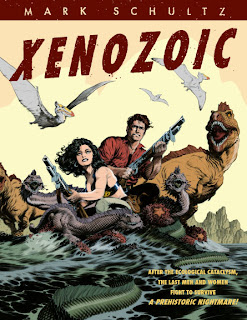 Final colored cover for solicitation.
Mark next provided the finished black and white inked artwork. Taking the Futura type font I next went through the process of distressing it, making it look less pristine and more disintegrated. The goal of this cover was to give it a "pulpy" rustic look. I gave Mark a version of the title that was pretty straight forward, close to what he had originally envisioned. I also gave him a version of the title using a condensed version of the font and adding a slight slant to the characters. The second version felt more appropriate to the style of the book and the illustration. Mark and John agreed to using that version.
Mark then printed out a copy of the black and white art and created a water color guideline of how he wanted the cover to look. I used this guideline to create a digitally colored version of the cover. Mark cautioned me that the colors had gotten a little dirty because of painting on top of a photo copy, so he told me to lighten them somewhat. Because of time constraints we had to create a substitute cover, so it could be used for solicitation purposes. Mark's intention is to actually water color the artwork himself for the "real" printed cover. Using his black and white inked art, Mark will make a print out on water color paper and apply the colors to it. A second print out will be made of just the black and white artwork that will be registered on top of the color and then used for printing. I think this is the first time that he has actually hand colored any of his cover images. I am very excited to see the results of his version of the painted cover.
After getting it digitally colored, I put in the black banner with Mark's name at the top and applied the title. I started second guessing myself and thought the banner at the top should appear more clean, and less busted up for better legibility of Mark's name. I matched the color of Jack's shirt to the title, thinking it would be a good balance of reds, I also added the drop shadow to give it more weight and punch.
Mark suggested eliminating the drop shadow and returning the banner at the top to the distressed version. He also wanted the red to be a darker more blood red version, (he thought my version was too feminine, I get that a lot). After a few more attempts at getting the red the right color, the cover was given the final nod of approval.
Posted by Randy Dahlk at 7:31 PM 2 comments: 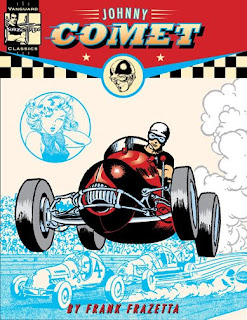 Cover for the softcover version of the book.

Cover for the hardcover version of the book.
Well, based on the idea, that there was an ad printed in the latest issue of Comic-Con magazine announcing this book, I guess it's safe to reveal my newest designs.
Sometimes projects come along that get me giddy and scratch my itch. This was one of them. Based on the title of this blog, it's safe to assume, I kind of like retro themed things. This assignment put into one package so many different things that I'm passionate about. First we have the 1950s... great fashion, interior design, color palettes, and car designs. Then we add the excitement and danger of rollicking midget car racing. Next we throw in a glorious black and white newspaper strip. Finally, to top it all off, we have Frank Frazetta! How can it get any better than that?
All the art in this book, are new scans from Frank's personal copies of proofs and tear sheets. The detail is spectacular. There have been other collections of this comic strip, but never has the art been this sharp and crisp. All the delicate inking lines that Frank originally applied to his drawings can finally now be seen as he had intended. It's really an eye opening experience. Having the chance to work on Dave Steven's Rocketeer book gave me lots of time to savor his artwork, but working on this book showed me how much Frank's work on this strip influenced Dave.
When designing the cover, I wanted to take all of my influences from the 50's (hot rod magazines, service station logos and products, and midget car races), and add some contemporary treatments, and roll them together to create something both old and new. Since Frank was not suppling new art for this cover, I got a chance to dig through his existing art and try to come up with an appropriate cover image. This was great fun, studying and dissecting each panel from the strips. I like how this cover turned out a lot, (I hope that doesn't come across as pompous). It to me, has qualities of a retro-flavored racing program or hot rod magazine, but I think it still retains it's new car feel.
For the slipcase, I used exploitive movie posters from the 50's for inspiration. There are some great hot rod and juvenile delinquent movies from that era. The only thing I would have liked to add, would have been tears and creases. I think that would have been cool (the publisher didn't go for that idea).
This is one of the few times I've actually created a logo for the title of the book. I would like to take the mastheads or logotypes and print them on black-t's. I think that would be a great merchandising tool. I would wear one! Better yet, what if they were turned into patches, and sewn on the back of jackets?
This is another "dream come true" project. I'm sure most comic book artists would agree that Frank's work has been hugely influential to them. I'm thrilled to be part of this. This will be the first, of a four book library, reprinting Frank's comic book work. I want to add other fun elements to this book to try to make it a complete historical record, of not only the strip but, of that unique period of time.
Climb on board and buckle your seat belt, we are going for a fast ride!
Posted by Randy Dahlk at 4:56 PM 5 comments: