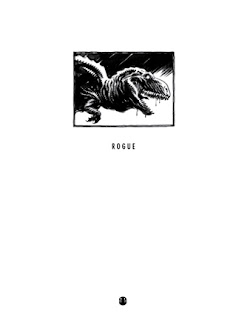 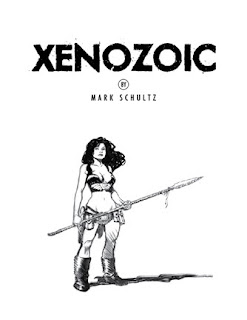 Final Cover Design
It's always a pleasure to work on projects with people who's work you admire. Xenozoic is certainly one of those projects. Mark Schultz's art is just plain beautiful to look at. When we started having dialog about how to go about designing this book, we decided the best approach, was to show a lot of white space on the new pages. Because Mark's artwork is so dense, it seemed to make sense to break things up with pages that would give your eye some resting places. So the approach was to simplify. With the chapter dividers, Mark did 20+ new illustrations, each representing an iconic interpretation of that story. The chapter title was discreet and slightly kerned out, giving it a look of sophistication. A small trilobite logo was placed at the bottom of the page to balance everything out.
The title page was set-up much the same way, with lots of white space. It's interesting how using white space becomes very much, a design element. I think too many times there is a desire to jam way too much information onto a page. What becomes the focal point? This way you can take in all the information, and possibly linger on it, longer.
There were a few changes to the final cover, one of them was obviously using Mark's painted version of his artwork. Mark also wanted to go back to the title type that wasn't angled, but still looked distressed. It represented something stronger and bolder. I think this falls into the same philosophy as the inside design, simpler is better. I think it's eye catching and very handsome as a final solution.
Check out John Fleskes blog (Flesk Publications) for a more in depth description of Mark's process of creating the cover illustration.
Posted by Randy Dahlk at 1:08 PM 3 comments:

Menagerie: The Art of Animals 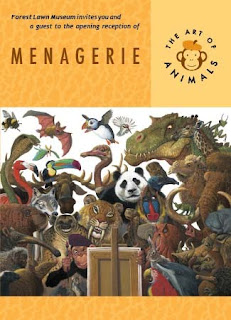 First design for the invitation 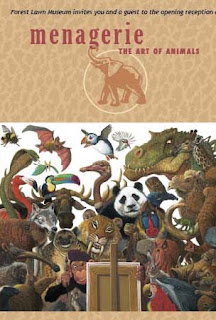 Second design for the invitation 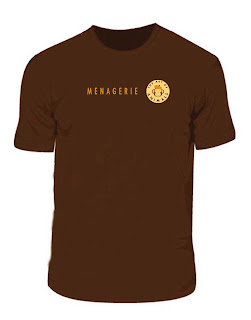 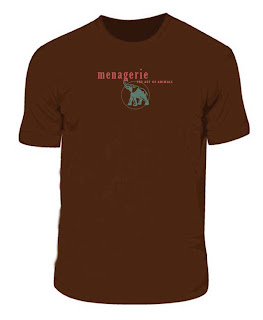 2 t-shirt designs based on design elements from the invitations 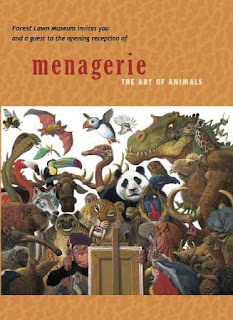 Final invitation design
In May I got a call from Joan Adan, curator for the Forest Lawn Museum. She gave me a call based on a recommendation from my good friend William Stout. She was wondering if I'd be interested in designing an invitation and show catalog for an exhibit that was opening up in August. The show was to be titled Menagerie: The Art of Animals, it was going to include original artwork by many very talented artists and illustrators. The list included, Drew Struzan, Ian McCaig, Marc Davis, Charles Russell, and Charles Knight. William Stout was co-curating the show, showing eight of his paintings, lending several pieces from his personal collection of other artists, and doing a new painting that would serve as both the cover to the invitation and the catalog.
What an enjoyable experience this ended up being. Starting out with a brand new beautiful painting by William Stout, it was hard not to be enthused about this project. Based on the painting by Bill, anything I did would end up looking good.
The first 2 invitation designs, I was trying to create an icon to go with the title. I wanted a symbol that could be used to identify and promote the show. I also thought it would be fun to create t-shirts to sell at the show or wear to promote the event. In the first attempt, I was playing off using a simplified version of Bill's beret wearing chimpanzee (think Paul Frank).
The second version, I wanted an elephant interacting with the type, as if it were holding up the word Menagerie. In both of them, I used a background that resembled a pattern that might be found on an animal (giraffe). Joan wanted to simplify the design, and felt with the icons, it was too busy. So the final attempt was to strip it down to it's most important basic elements and tweak the color to follow closer with the palette of Bill's painting.
Check out William Stout's website for a really neat process and explanation of how he did the final painting for the show.
Posted by Randy Dahlk at 11:03 AM 1 comment:

Well, I just found out, that The Rocketeer Complete Adventures Deluxe Edition won 3 Harvey Awards! I think that is quite exciting. Here's an explanation of who he is, and what they represent...
BALTIMORE, MD (July 11, 2010) -- The 2009 Harvey Awards Nominees have been announced with the release of the final ballot, presented by the Executive Committees of the Harvey Awards and the Baltimore Comic-Con. Named in honor of the late Harvey Kurtzman, one of the industry’s most innovative talents, the Harvey Awards recognize outstanding work in comics and sequential art. They will be presented August 28, 2010 in Baltimore, MD, in conjunction with the Baltimore Comic-Con.

Nominations for the Harvey Awards are selected exclusively by creators - those who write, draw, ink, letter, color, design, edit or are otherwise involved in a creative capacity in the comics field. They are the only industry awards both nominated and selected by the full body of comic book professionals.

It won awards for "Best Domestic Reprint Project," and also "Special Award for Excellence in Presentation" and Laura Martin won for best colorist on the project. 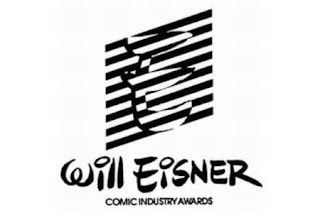 More exciting news, back in July, the book also won 2 Eisner awards. Here's an explanation on those awards...
The Will Eisner Comic Industry Award, commonly shortened to the Eisner Award, is a prize given for creative achievement in American comic books. It is named in honor of the pioneering writer and artist Will Eisner,and includes the comics industry’s Hall of Fame. Each category is nominated by a five-member panel, voted on by comic-book professionals, and presented at the annual Comic-Con International convention held in San Diego, California.
The book won the award for "Best Archival Collection/Project—Comic Books," and Laura Martin, once again won for colorist on this book.
I'm thrilled and delighted, It really was quite the team effort to put the book together. Thanks to Scott Dunbier for allowing me to do the book as I had envisioned. Also thanks should go to Kelvin Mao, who worked very hard (night and day) on doing whatever was necessary to see the book was done to the highest level of expectations.
How's that for a speech? Since I didn't get a chance to give one for real, I thought I would take the chance and do it here. 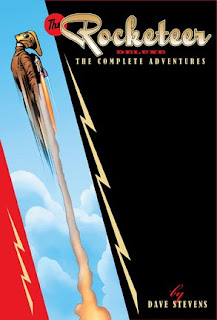 As far as the book goes, it sold out pretty quickly, however, the good news is, it is being reprinted. The image above shows the new variation on the slipcase for the book. This will help distinguish this from the first printing. Otherwise, everything else will be the same as the first printing. I think...this is coming out in October.
Posted by Randy Dahlk at 3:46 PM No comments: