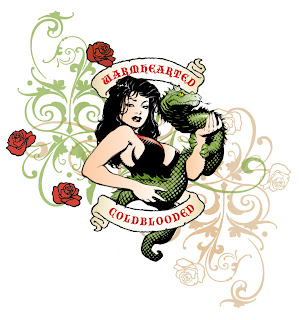 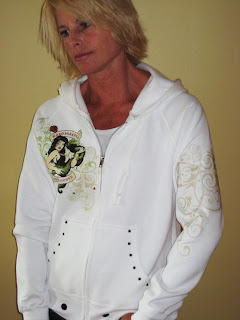 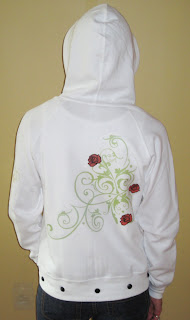 This was my attempt, along with Mark Schultz to do something fashionable. We wanted to create something using Mark's characters that fit in with current fashion trends. Mark provided the copy, and the image of Hannah with the serpent, and I built the design off of that. We both wanted this to have a tattoo vibe, but maintain a feminine quality. It has a sleeve print along with faux jewels attached around the logo design.
We sold these at the 2009 San Diego Comic-Con, along with tank tops with the same design. I think the influence of the design is rather obvious, but we felt with a softer palette, we might be able to do something a little more attractive. This might be worth pursuing more in the future. Maybe next time we will include the male audience.
Posted by Randy Dahlk at 9:35 AM No comments:

This is the last logo posting for a while. This is a logo that was completed a couple of weeks ago. This may or may not be part of a project I'm currently working on...???!!!
Posted by Randy Dahlk at 2:43 PM No comments: 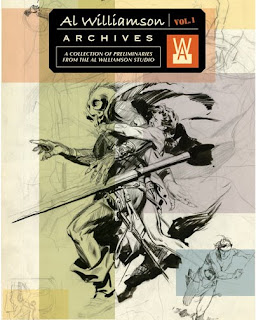 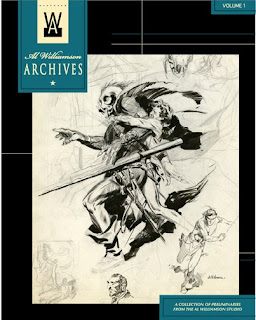 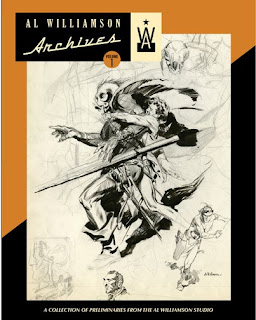 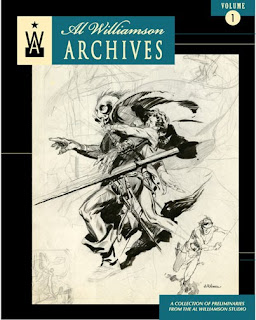 This is a progression of cover designs for the new Al Williamson Archive book from Flesk Publications. This book will be the first in a series of books printing Al's preliminary sketches and visual brainstorms. John Fleskes and Mark Schultz spent several days at Al's house going through the stacks and stacks of original drawings and scanning them for this book. This will be the first time these images appear in print. This book and future volumes will be an amazing historical record of Al's work over a 55+ year period.
I have to admit this was a bit of a struggle for me. I wasn't sure what to do with the cover. I didn't want this to look like a traditional sketchbook that is seen in the comic book industry. It's always a challenge for me to design books for people who's work I cherish. It's a great honor and privilege to design packages that contain such inspiring work... I don't want to screw up.
After going through the hundreds of images, John and Mark had decided on the image they wanted for the cover, now came my turn. John told me I could do what I wanted with the image, I could crop it anyway I saw fit, or I could run the image full-bleed off the edges.
The first cover at the top, I tried re-using the "tag" idea from the Bama book. I thought it had the look of how you might label some kind of important document. I thought it fit with the archive idea. I added transparent colors to give the illusion the art was done on tracing paper. I also thought it would help lighten up all of the black areas. I wanted this to feel airy and sketch-like.
The second cover, I decided to frame the art, and not allow it to float. I tried adding a vertical title box to give the cover more sensation of height. I added the thin rules in the black area to give the feeling of movement to re-enforce the action in the drawing. I also created an asymmetrical balance to add to the dynamic tension.
The third cover, followed the initial direction of the second cover. Instead of a vertical title box I used the more traditional horizontal approach. I wanted this to have more of a 50's vibe, since that is when the majority of Al's work was done, so I used that refrigerator looking font. I used the diagonal color blocks to again, create movement.
John liked the first and second cover designs. He was concerned however, that with the second design, that Al's name didn't appear large enough. He then left it up to me to figure out which cover to go forward with, and how to solve some of the problems. The fourth cover, is taking into account all the suggestions, and mashing together the ideas that worked from the 3 designs, and creating a hybrid. And that folks, is how it works.
Posted by Randy Dahlk at 2:20 PM 6 comments: 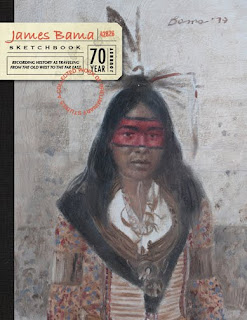 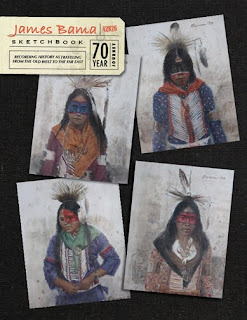 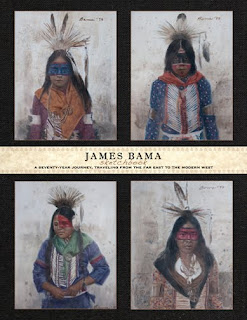 Here's a progression of cover designs for the James Bama Sketchbook, done for Flesk Publications. When John asked me if I wanted to design the cover for this collection, I was thrilled. I've been a big fan of James Bama's work for decades. My first exposure, like most people, were through his painted covers of the "Doc Savage" series of paperbacks. There was certainly something very unique and exciting about his paintings. Flesk Publications has a beautiful book devoted to the history of James Bama and his work, I recommend it to anyone who seeks to get more information on this artist and to see reproductions of his work.
The cover at the very top, was my first attempt at putting a cover together. Because this sketchbook represented drawings he had done as he visited different parts of the world, I wanted it to look like a travelogue. I thought the title portion of the book could look similar to a passport, with stamps and a certain 3 dimensional quality to it. I also wanted to focus on just one image to make it both simple and strong. John Fleskes felt because the painting I used, was actually one of a series, that I should include the other three images. In my second attempt, I still wanted this to feel like a working sketchbook, so I thought placing the images on the cover somewhat randomly, had a feeling of them being tossed on top of the cover as they were completed. I wanted the cover to feel energetic, and spontaneous, just like the sketches on the inside.
Unfortunately, Bama didn't agree. So, on the third attempt I made the cover more formal. I also created a faux bandwrap that contains the title. I think this gives it a look of more sophistication and a certain preciousness.
I still haven't given up on using that "passport" idea, I'm thinking of re-using it for another cover I'm working on now. Maybe it wasn't appropriate for the Bama sketchbook, but I think there might be more applications for it. Always remember..."re-cycle, re-use." I like to do my part for the environment!?
Posted by Randy Dahlk at 8:54 AM 3 comments: