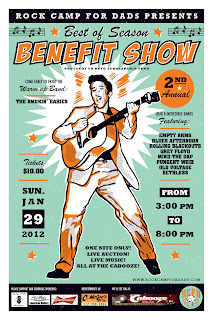 Rock Camp For Dads, offers opportunity for all musicians of various abilities, to come together and form a band. The camps run 4 weeks at a time and have all different musical themes. Themes have included, the music of the Rolling Stones, Led Zeppelin, Pink Floyd, and the Eagles, or music representing different eras from, the new wave 80s or the swinging 60s. After rehearsing 8-12 songs over the month, Rock Camp For Dads sets up a venue and the band gets to play their first gig together. After that, the tough decisions happen, do they sign a record deal, or break-up over creative differences? RCFD is a great chance for frustrated rockers to have an outlet to their musical passions.
As part of my participation, in one of the camps, I was given the task of designing the 2nd annual benefit poster. I love the look and feel of the old time Rock and Roll revues that happened during the 50s. I used that, along with the Hatch Show prints, as my influence for the poster. I think the most important thing when doing posters, is to get people to read them. I thought who better to get people's attention then the King of Rock and Roll.
I know you are dying to know, which camp I'm participating in...it's Van Halen. I don't play an instrument, although I wish I could. So believe it or not, I actually am going to attempt to sing, which means I have to do my best effort at channeling David Lee Roth. Good luck, right? I'm about to find out how much I can actually embarrass myself. Oh well, it's all for fun........yikes!
Posted by Randy Dahlk at 2:28 PM 4 comments: