GameWorks, what it should have been...

One of ten logo designs I presented to DreamWorks SKG. 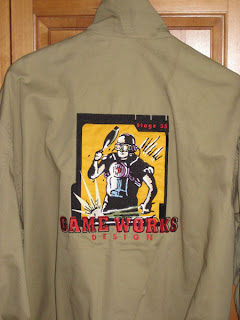 This was one of my designs, that the design team took, and had embroidered on the back of jackets and gave out to everyone involved in the project.
In 1997? I got a call from Bill Stout, asking me if I would be interested in doing some design work for DreamWorks SKG. He was part of the concept and design group creating video arcades for the team of Universal Studio, Sega and DreamWorks SKG. The original idea was to create a game arcade that had a futuristic retro feel, along with the idea that children had taken over a giant warehouse and created this play space. It was, in a sense, an indoor amusement park, with a Disney inspired feel, for creating artificial imaginative environments.
The lead designer was John Snoddy, who was one of the imagineers for the Disney theme parks. John wanted me to design some retro styled logos that would give the arcade an identity. I also worked on some graphic images that were to be scattered around the inside of  the building. I got a chance to visit stage #35 at Universal Studio, and to see some of the concepts, artwork and scale models of the plans they had. It was pretty exciting. They had actually created miniature poster versions of some of my artwork, and included them on the inside walls of the model of the arcade. It was truly humbling to be amongst these incredibly talented designers, and to have them accept me as one of the team.
Bill was so generous with his time with me that day, he had stacks and stacks of watercolored illustration boards showing designs for kiosks and proposed interactive themed games. One of the ideas he had, was to create a kiosk called "the filling station," this is where you could get your favorite beverage. The great thing about this was, the servers were all dressed in vintage style gas station attire, including hats and bowties, and would dispense your drinks via a gas pump. It was very clever and witty. This was just the beginning of the all the incredible ideas he had.
Unfortunately, GameWorks in reality, became just a shell of what the original proposal was. DreamWorks SKG actually pulled out, and GameWorks ended up pretty much like any run-of-the-mill arcade. They kept none of the unique feel or the atmosphere that would have made this stand out amongst all of the other cookie cutter ideas. It's a shame, it was such a waste of all those brilliant ideas and incredible talent.
One other story of note during that day. When I was hanging out at Bill's desk eagerly going through all his stacks and stacks of fantastic ideas, he received a phone call. After he hung up, he told me that on the phone, were people representing "Steve," they had asked Bill to do some design work of a bug creature, that would "scare the heck out of Steve." This was for a movie that was in the works, based on a comic book property, that I had never heard of. At dinner that night, I got to watch Bill sketch out his ideas with a Sharpie on some napkins. It was fun to see his wheels turn as he drew some nasty looking insects. It was several months later, when I actually got to see the movie that Bill had created that creepy bug for, it was called "Men in Black." There up on the screen, at the end of the film, was that big bug creature, that I'm pretty sure did, scare the heck out of Steve. Oh by the way, the reference to Steve in the story, was actually Steven Spielberg. I wish I had those napkins...
Posted by Randy Dahlk at 10:10 AM 2 comments:

Scenes from the Xenozoic Age portfolio 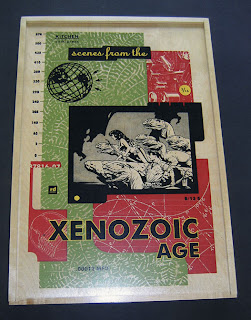 Outside of portfolio box, with silk screened image 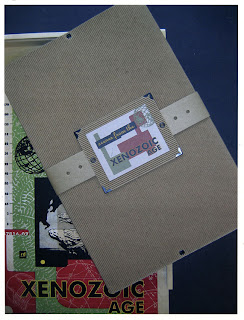 Corrugate folder that held the prints 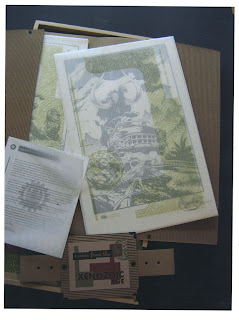 Vellum envelope and chapbook found inside of folder
When I first became familiar with Mark Schultz's artwork, I knew that I would some day have to do a project with him. In 1997 I got my chance. After five years of begging, pestering, and presenting concepts and mock-ups, Mark's publisher at the time, Denis Kitchen finally gave in. After discussions with Mark and Denis, it was decided to create a portfolio of prints of Mark's cover art. Now Denis, who is a true visionary, wanted to create the most lavish portfolio ever produced for the comics market. He basically told me to pull out all the stops. That really is a dream come true to any designer.
It took a lot of research and networking to pull together all of the different vendors to make this portfolio happen. I knew I wanted the basis of the design to be a wooden box, where the top would slide off to reveal the contents. I wanted to create a portfolio that was built in layers, each thing that you opened, would in turn, unveil a new thing to explore. I also wanted to create an aesthetic similar to Mark's approach to storytelling, where nature and machines work together in harmony. The graphics on the top of the box are a combination of schematic plans along with organic imagery. The folder and band wrap on the inside of the box is a natural e-flute corrugate with metal grommets and corners. The two envelopes inside the folders are a translucent vellum, with a one color image printed on the outside. Each of the ten 11" x 17" prints is embossed with the gear/trilobite logo. The portfolio was created in an edition of 99 and retailed for $299.00. I think they all disappeared pretty fast. Which, I believe, was a great relief to Mr. Kitchen.
It was quite a project. I was happy with the results, it was a good start to my collaborations with Mark. Denis was a fantastic publisher to work with, he greenlit the project and let me run with it. As an artist himself, he knows what it takes to get the best work out of creative people.
Posted by Randy Dahlk at 9:49 AM No comments: