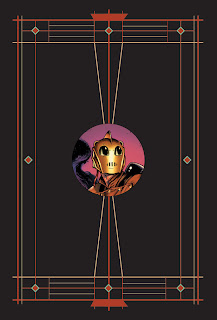 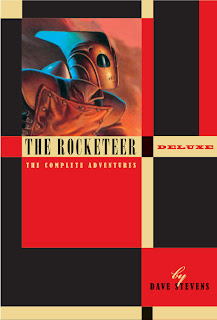 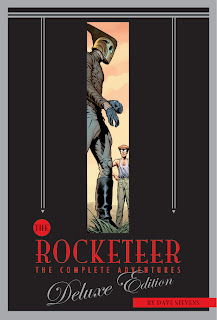 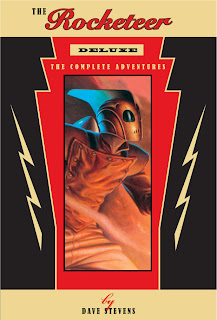 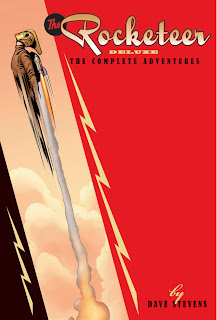 The original design for the slipcase of the deluxe edition of "The Rocketeer," had die-cuts in the case, so you could see part of the image of the actual book inside (see earlier entry). I was trying to be clever and use some of the same design elements, except flop the colors. I wanted the slipcase to feel like an extension of the cover. After it was designed and approved, the vendor suddenly decided they could no longer do die-cuts. Huh???
Well, it was back to the beginning. Since the slipcase no longer had the die-cuts, I felt it wasn't as necessary to create a design that repeated the book cover aesthetic. This was an opportunity to create a whole new design. I headed into two different directions, one was to maintain some of the elements of the book cover (color palette, lightning bolts, and type treatment), the other was to try a new approach but continue to stay true to Deco/Streamline influence.
The designs have to go through an approval process, and by showing several different versions, it helps everyone to narrow things down to their first and second choices. The danger is, sometimes other people pick something different from your own personal favorite. Design is such a personal taste issue, that it's good to get specific feed back. What do you like, and what don't you like, and why? It's also good not to have a big ego.
In this particular case, I had no problem accepting the choice that was made. I think it works well with the book cover, it's consistent with the design vision, and it's a logical extension. It's the last image posted that was decided upon (the Rocketeer flying at an angle to the corner).
To make the slipcase feel a little more "special," the lightning bolts will be de-bossed and the title, lightning bolts and image of the Rocketeer will have a spot varnish applied.
Both versions of the book should be available in early December.
Posted by Randy Dahlk at 9:53 AM 7 comments: